Who’s at the heart of a dementia friendly community?

By Laura Bowley, TWIMC Partner and Director, Mindset Centre for Living with Dementia

So many times products and systems are designed without consulting with the people who will use them—the end users if you will. How many times have you heard a bank teller, customer service rep, or cashier exclaim, “If only they’d asked ME when they designed this %@$# computer system!”

Back in the day, when I was a systems consultant managing large mainframe software purchases and installations, the consulting company I worked for insisted that us project managers work with a committee of our client’s IT and end users to develop a questionnaire that laid out the user requirements—their vision of the new system, what they needed, how it must work, and how it must integrate with existing systems.  The questionnaire would then be presented to the software vendors, and their proposals needed to be based exactly on the questions laid out in the questionnaire—no deviation and no excuses!

Two interesting issues emerged. One was getting the systems users and the IT folks to actually work together towards a common goal without IT dissing the end users and the end users strangling the IT people. Just getting them to speak a common language was fun. I learned a lot about workshop facilitation, team development, and keeping everyone on the same page and moving in the same direction towards a common goal. I had herding cats down to a science.

So, while the purchasing process was…interesting…the final product was just about perfect. All integration issues and tweaks that needed to be made were identified up front. Installation and implementation were a dream.

What has all this got to do with dementia friendly communities?

“A place or culture in which people with dementia and their carers are empowered, supported and included in society, understand their rights and recognise their full potential.”

When I talk about “community,” I define it as any place where people come together on a regular basis and form a relationship. Therefore, a community can be faith-based, an activity centre, a workplace, or a town, as examples.

ADI goes on to define the four essential elements of any dementia friendly initiative: communities, organizations, partnerships, and people—specifically people living with dementia. They state:

“Dementia friendly communities should be shaped around information about the social and economic impacts of dementia, the needs and opinions of people living with dementia, together with input from carers. Only by ensuring that initiatives are inclusive of people living with dementia at all stages of development, will we succeed in giving them the sense of respect, dignity and purpose they seek.” (See https://www.alz.co.uk/dementia-friendly-communities/principles for the full text.)

Thus, the voices of those living with dementia need to be at the heart of dementia friendly communities.

Few people would disagree with this statement, just as few would disagree that computer software design should be based on the needs of the end user. However, what that looks like and how it’s achieved are quite another matter.

Generally speaking, of the few dementia friendly community projects that I’ve seen, people living with dementia are included in such capacities as members of advisory committees, speakers, co-facilitators or trainers during training sessions for community members and businesses, and as contributors to the training design and program delivery.

No doubt through the training and inclusion of people with dementia, the narrative of dementia has changed in the communities where dementia friendly projects have been undertaken. 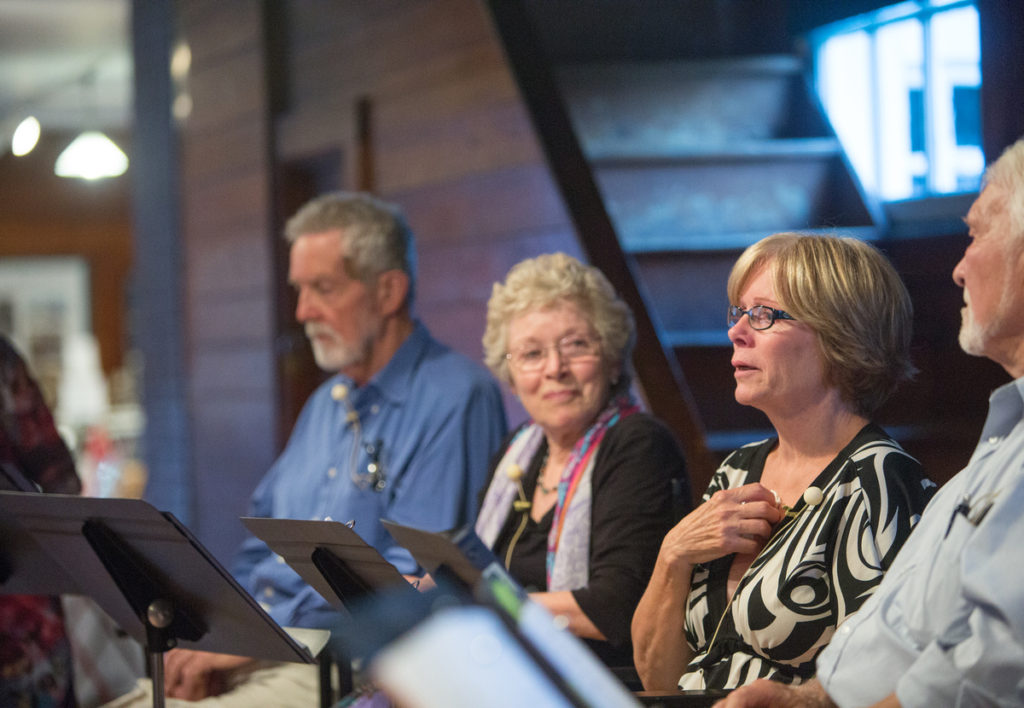 And a To Whom I May Concern® performance does just that. Literally.

A To Whom I May Concern® performance takes the format of a scripted reading by people with dementia, performed in front of an invited audience or the general public. The script is co-created by a Sharing Group of people living with dementia, a trained facilitator, and a scribe, and includes the stories of group members as they share their experiences of living with dementia. Topics usually include the diagnostic process, sharing the diagnosis with family and friends, adapting to new challenges, how they need their communities to adapt, and hope for the future. The fact that the reading of the script is done BY the people who contributed the stories means the audience is witnessing a first-person narrative, not a performance by actors.

After each performance, the audience is invited to ask questions of the Sharing Group members, opening the door to unstructured dialogue. Performances are sometimes wrapped up by asking each person in attendance to make a commitment to one action they can take to make their community more dementia friendly.

What emerges from the performance is a clear idea of what people living with dementia need to feel empowered and supported in their communities, and to recognize their full potential. Inspired by the bravery, love and humour demonstrated by Sharing Group members, all of whom are living with dementia, a new narrative of dementia begins, one that spurs community members forward with new enthusiasm to make their community dementia friendly.

Can you imagine kick-starting your dementia friendly community initiative with a To Whom I May Concern® performance to your town council? To the local medical community? To your Chamber of Commerce? To the media? A clear demonstration that your community means it when they say they are placing people with dementia at the heart of the dementia friendly initiative sets the tone for your entire project, and immediately changes the narrative about dementia, smoothing the way for an easier implementation.

If you’re looking for a way to kick off your dementia friendly community project, find out more about bringing To Whom I May Concern® to your community or take the training to become a facilitator. If you have any questions, please contact Maureen and Laura.

Laura Bowley is a communicator, and brings 30 years of experience as a writer, management consultant and graphic designer, along with a background in technology, to changing the story of dementia. Changing the story means listening to the voices of people with dementia and starting a new conversation. To that end, Laura partnered with the interactive theatre project To Whom I May Concern® and launched the My Dementia Story project for people with dementia to share their stories. Motivated by her mother’s experience with vascular dementia, Laura started Mindset Centre for Living with Dementia, working with people with dementia to change the story of dementia through advocacy, education, and peer support.

“This Is My Voice”

“This Is My Voice” gives a face and a voice to early onset dementia and provides an educational experience that changes hearts and minds.
Click here to download This Is My Voice.